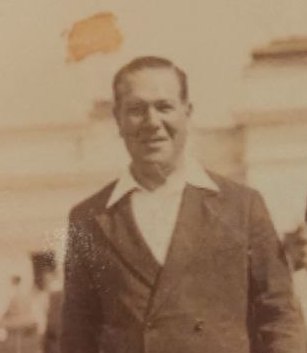 Legendary boxing trainer of the 1920s and 30s, Jack Goodwin, lived an eventful and colourful life. In this 1924 autobiography, he describes his rise from street fighter to the world’s best boxing trainer.

His older brother suffered from poor health (breathing difficulties) which ruled him out from being able to serve in the Prussian army, as was mandatory in that country at the time.

The alternative to serving in the army? Being sent to work in the salt mines. This would have been an effective death sentence for someone of ill health.

The family lived for a time at 12 Hope Street, Spitalfields in East London’s Whitechapel.

After arriving in England, the Goldstein family renamed themselves to ‘Goodwin’, with Jacob becoming ‘Jack’. Many with Jewish and Polish roots in the East End of London around this time followed this trend of changing their names in order to help prevent (often violent) persecution by the native English.

Whilst none of the above is mentioned in Goodwin’s book, it serves as background information to illustrate the tribulations that the family had overcome.

So, the young Jack grew up as a Londoner from the tough East End.

The book begins by charting Jack’s street-fighting days in and around his local area while still at school. Being from his background, it seems like being good at fighting was something of a necessity.

Several ‘scraps’ are recounted as well as the spotting of his talent by local boxing people. Soon Jack becomes one of the regular boxing attractions at Whitechapel’s ‘Wonderland‘.

By the time of the early 1900s, Wonderland was a major London attraction. It featured not only boxing matches but a world of popular entertainment from that era. This included freak shows, music, animals and the like.

As well as earning a living from the day job, Jack was regularly paid for his performances in the ring. This was a far cry from today’s boxing purses, and money could also be made by backing yourself with local bookmakers.

Goodwin’s fighting career ends in very unfortunate circumstances with illness and he spends a whole year in hospital fighting for his life.

Determined to carry in in some form in the sport that he loves, Jack decides to use his knowledge to become a trainer of boxers.

A man of clear ambition and talent, Goodwin first describes how he took the role as the chief second (trainer) of his younger brother Joe. Joe Goodwin was a professional bantam-weight boxer who fought between 1900 and 1912.

Thereafter, he goes on to detail the profiles of additional boxers who come under his instruction including Sid Burns (welterweight) and Harry Mansfield (Jack Jones).

The book details Jack’s account of his adventure to Australia in January of 1913 that lasted 13 months and ended with him returning to London a wealthy man.

After this book was published (in 1924 when Jack was about 44 years of age), there was yet still more to follow that makes Goodwin’s life story even more interesting. Having done some additional research, I’ll expand on it here.

Goodwin went on as a world-famous boxing trainer for nine years after the publication of this book, as demand for his services remained strong. However, in 1932 his doctor warned him off continuing due to heart trouble.

On the 3rd of March, 1932, Goodwin was the trainer to Canadian fighter Larry Gains in his defence of the Commonwealth (British Empire) Heavyweight Title at London’s Royal Albert Hall against South African heavyweight Don McCorkindale.

After the bell for the end of the 13th round ended, Goodwin asked one of his team, Jim Ransford, to mop up some water that has been spilled in the corner so as to prevent Gains from slipping in it.

“As I turned around after doing so,” said Ransford, “I noticed poor Jack sinking slowly to the floor in a heap. To keep the truth from Gains we merely said that Goodwin was unwell.”

Gains was declared the winner but Jack Goodwin died on the steps of the Albert Hall, aged just 53. The news was carried around Britain’s airwaves, as the fight was broadcast live on the radio.

“…it was a great personal loss. Goodwin was the king of trainers“, Gains is recorded as remarking.

On the 8th of March, 1932, his emotional funeral was held in London’s East Ham Cemetery. Large crowds of weeping mourners were forcibly held back by policemen from the hearse as traffic came to a standstill.

Among the tributes paid to Goodwin, scores of wreaths were on display including one from Goodwin’s friend, Lord Lonsdale. Lonsdale had written the foreword for Goodwin’s earlier book, “Boxing” in 1922.

Myself and My Boxers is a fascinating insight into a largely forgotten and little-documented character in London’s rich and diverse history. The adventurous style of story-telling of his life gives the impression that Goodwin really enjoyed himself.

There certainly are some comical moments that he describes, and some that raise an eyebrow, but for the time were likely considered fairly normal.

Only rare copies of the book can be found today, as might be expected.

Myself and My Boxers: Book Details